The Don of a New Error

by The Alternative Facts 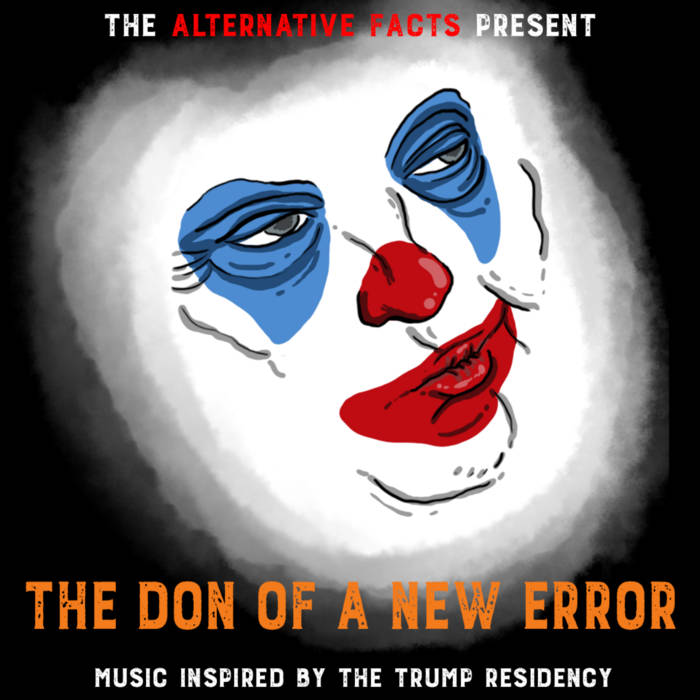 "The Don of a New Error" is a 24 song travelogue over the past two years, with stops in Moscow, Berlin, Pyongyang, Charlottesville, Bozeman, San Juan, the Mexican border, and (of course) the White House. We donate a portion of all profits to the ACLU, Planned Parenthood, and other non-profit organizations that are not sanctioned by Donald Trump and Mike Pence.

*** IMPORTANT *** We are pleased to offer this album free of charge to reviewers, DJs, and low-income listeners. The message is more important than the money. If you are interested, send us an email message -- alternativefactsmusic (at) gmail (dot) com

We know that 24 songs is overwhelming!

"Grizzly Girl" (#5) -- in honor of Betsy Devos, arguably the least-qualified Cabinet Secretary in US history

"Chicken" (#12) -- Rocket Man vs the Orange Clown: which crazy man will be the first to blink?

"Take A Knee" (#16) -- discusses the reasoning behind NFL non-violent protests.

"TrumpTax" (#19) -- spills the beans about the "Tax Cuts and Jobs Act of 2017", which was designed to benefit the top 1% while hoodwinking the middle-class.

"Caravan" (#23) -- honors the Central American human caravan, who deserve compassion and empathy. Some Americans have forgotten that this has always been a land of immigrants.

Thank you very much for listening! Spread the word!

"Behind every great fortune there is a crime" -- Balzac

"The truth does not need to be defended." -- Elisabeth Kubler-Ross

Music inspired by the news of the day.

The Alternative Facts roared to life on Inauguration Day 2017, taking our name from Kellyanne Conway's definition of LIES, which continue to stream from the Trump Administration on a daily basis.